Notting Hill Gate is important to us residents of St Helens, as a place to shop, see a film, or have a meal.   Many people living in these streets were drawn towards this area because of its relative proximity to Notting Hill Gate, which has always been seen as an interesting, creative, and slightly bohemian part of London (long before Hugh Grant and the film gave it global recognition).

RB Kensington and Chelsea has been consulting recently on a planning framework for the Gate.  The area was comprehensively redeveloped in the 1950s, as part of a road widening scheme by the London County Council.  Some of its office buildings date back from that period, and others from the 1960s and 1970s.   Most are now outdated.

Several landowners have property holdings in the area, and have been putting together redevelopment proposals.  The largest of these is for Newcombe House (the tall block above Waterstones) and includes the row of shops and restaurants on the west side of Kensington Church Street.

The council’s new draft Supplementary Planning Document for Notting Hill attempts to set some parameters for redevelopment, in terms of building heights and densities.  It also contains proposals for upgrading pavements, public areas, and the entrances to the Underground.

The council’s ‘vision’ for Notting Hill is to retain its role as a ‘district centre’ for shopping and offices, and to improve the public realm for all those who use this very busy public transport hub – including the many tourists en route to Portobello Road.

In recent months the Kensington Society has been working with resident and amenity groups in the area (including St Helens) to refine some of the council’s initial proposals. In particular, the Society has argued that one of the RBKC ideas – that of using £8m of ‘planning gain’ to provide a 2,000 sq.m space for a museum or ‘cultural hub’ was not attracting much local support.  The Design Museum is already relocating to the former Commonwealth Centre in Kensington High Street, and does the borough need another museum space which might turn into an expensive ‘white elephant’.

The Kensington Society view, which has been widely supported, is that this £8m of public funds could be better spent, and could in part be used to secure a new public square, within the redevelopment of Newcombe House.  This is seen as giving the area a much needed focus, sheltered from the windswept main road, and an attractive locatiion for shops, cafes and resturants (as well as the Farmers Market).  The redevelopment of Duke of York Square, off the Kings Road, is cited as an example of creating successful open space within a new retail development..

The Society’s proposals are shown in the diagram below: 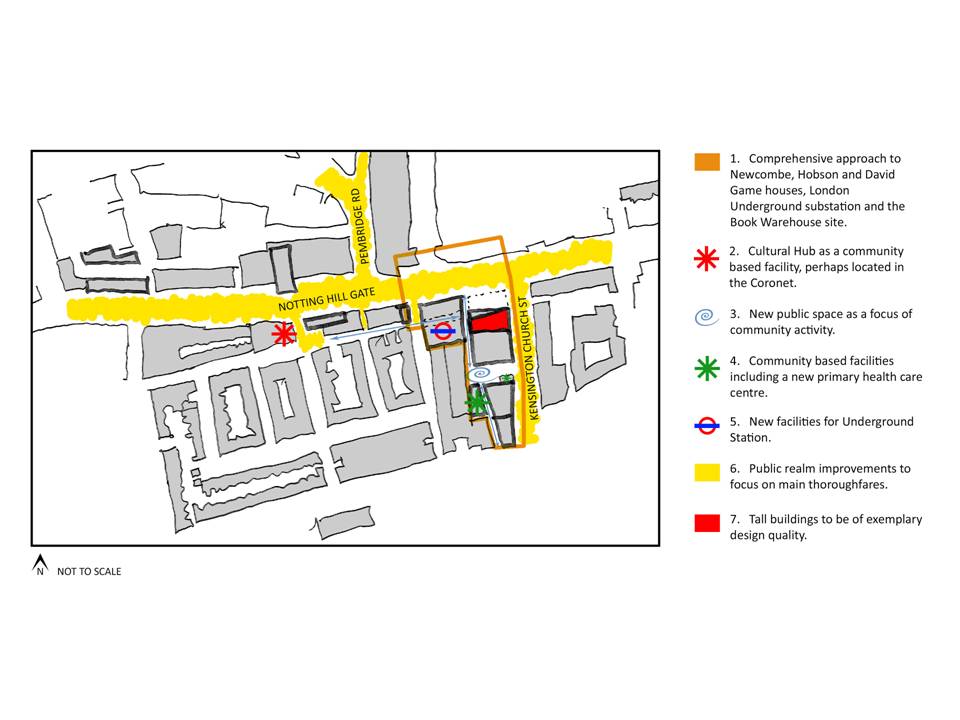 An issue likely to prove contentious once planning applications are submitted is the height of redeveloped buildings.  Developers will be looking to build high, in order to maximise profitable floorspace.  The owners of Campden Hill Towers would like to adds another couple of storeys.  The developers of Newcombe House has shown plans which include and office and residential tower half as tall again as the present building.  The council generally has strict policies on tall buildings, but will allow them in district centres maximise where they are claimed to provide a ‘landmark’ building of high architectural quality,  Residents of Hillgate Village wait to be convinced.

Having listened to the views of the Kensington Society and other groups, the council has shown some willingness to modify its original plans.  It will not be publishing the final version of the Noting Hill SPD until after the May elections, and may consult further before doling so.