Over 70 per cent of the Royal Borough of Kensington & Chelsea is covered by 35 separate conservation areas.  The council takes seriously its heritage.  More details of the council’s approach to conservation are here

The Oxford Gardens/St Quintins Conservation Area was designated in 1975, comparatively early in the history of conservation areas in the Borough.  This happened partly in response to the threat to the area from proposals for a Channel Tunnel terminal, and partly because of an active residents group keen to protect this part of London.

The Oxfords Gardens Conservation Area was extended in 2002 to include properties in additional streets.  These included streets which were previously in Hammersmith & Fulham, prior to an adjustment of the borough boundary.  A map of the Conservation Area boundary (thick green line) and the main features that lie within the SHRA/StQW neighbourhood, is below. 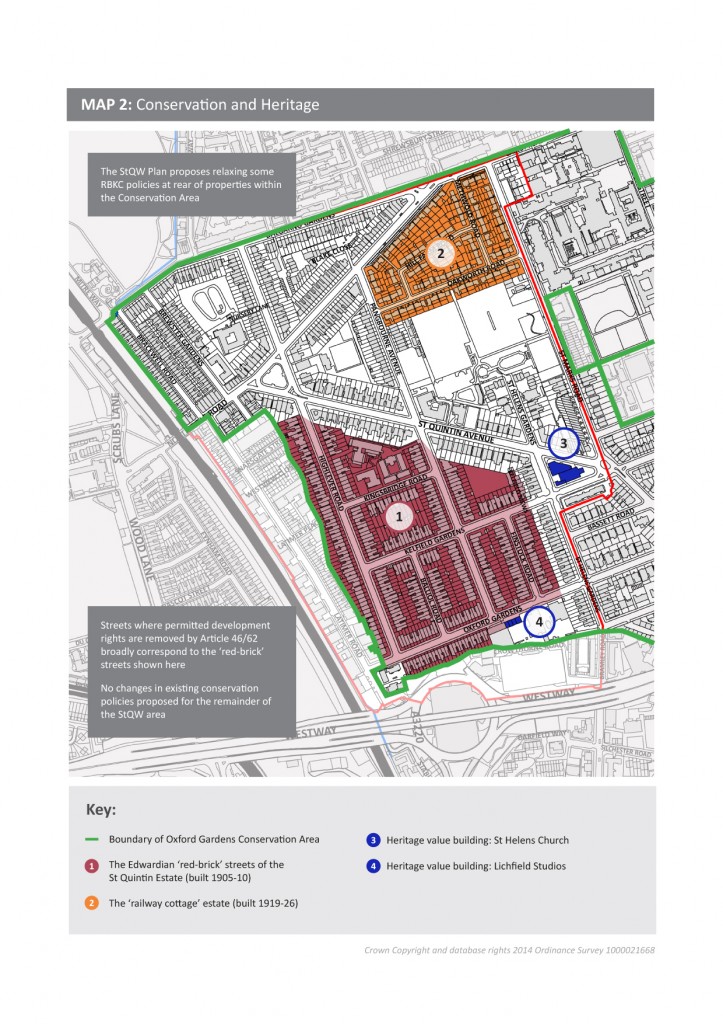 Our streets are are within a conservation area because they were built as a high quality and homogeneous example of Victorian and Edwardian housebuilding.  The area includes little by way of individual heritage assets.

The Oxford Gardens/St Quintins Conservation Area Proposals Statement can be found on the RBKC website here (scroll down a long list to ‘Oxford Gardens).  It was reviewed and updated in 1990.

Where a property is in a conservation area, it does not mean that changes or alterations cannot be made.  But there are tighter controls on what is allowed.  In many cases these restrictions result from specific Article 4 Directions adopted by the Council.  These Directions remove specified ‘Permitted Development’ rights that apply nationally, and mean that planning permission is needed for the types of works or development involved.

Common examples of alterations where planning permission is likely to be needed  include rear dormer windows for loft conversions, roof coverings (slates may need to be replaced with slates, and tiles with tiles), using impermeable paving or slate in front gardens, installing roof-lights, and alterations to facades facing the street.  Alterations to front boundary walls, and adding oversized bin or bike stores in front gardens, may also need planning permission unless the works involved fall within national Permitted Development Rights and these rights have not been removed or varied via a RBKC Article 4 Direction.

So it can be complicated to establish what building alterations are allowed, and not allowed, within this neighbourhood.  House owners would be well advised the check the position carefully before undertaking works, particularly where these affect the appearance of the house from the street.  You can contact the RBKC conservation team by calling 020 7361 3352.

The Council has an active team working on planning enforcement, and will issue Enforcement Notices requiring property owners to carry out remedial works or to remove alterations where planning permission was needed but has not been obtained.  This can prove an expensive business.

The St Quintin and Woodlands Neighbourhood Plan includes a number of new and/or updated conservation policies which are applied by RBKC when considering planning applications within the boundary of the StQW neighbourhood area (thin red line on map above).

These policies were formulated and agreed via open meetings of the Forum during 2015, as the StQW Draft Plan was being prepared.  In some cases they introduce variations to former RBKC policies.  The aim has been to ensure that policies are consistent across the neighbourhood, and pay more heed to how house-owners wish to adapt and use their properties internally.

For example, installation of rear dormer windows was not previously allowed in a number of streets in the area, under RBKC policies.  This prevented some owners from creating a loftroom, a popular means of extending a home.

StQW Policy C1 now applies, allowing rear dormers in all streets (excluding the ‘cottage’ properties where roofspace is insufficient for loftrooms, in the streets shown in orange as area 2 on the map above).  Rear dormers still require planning approval and need to meet RBKC guidelines on size and positioning within the roofscape.

You can check which Article 4 Directions apply in each street in the Borough via the list on the RBKC website at this link.   The main ones affecting this conservation area are numbers 46, 62, and 63.

A brief summary of the issues covered by Article 4 Directions that apply within the Oxford Gardens Conservation Area is as follows:

Not all of these Directions apply to all streets in the Conservation area. The safest route is to check with the Council’s conservation staff on the number above.  You can also check whether your property is within the conservation area boundary by entering the address at this link on the council’s website.

The Council’s Local Plan policies in Conservation and Design were reviewed in 2014 and are now incorporated in the Renewing the Legacy chapter of the Borough’s 2019 Local Plan..

Where applications depart from either RBKC policies, the Oxford Gardens/St Quintins Conservation Area Proposals Statement, or the policies in the StQW Neighbourhood Plan, the Association will normally point this out to the council and ask for the application to be refused.  If we think that the StQW conservation policies are being misinterpreted, we will say so but it is ultimately the Council as planning authority which makes decisions on applications.

While we have no wish to interfere unnecessarily with the proposals of individual property owners, the Association wants to ensure that conservation policies continue to be enforced on this part of the St Quintin Estate.  This is for the collective benefit of all residents in the neighbourhood.

This is not just an issue about protecting the heritage of the area.  It is also about miantaining house values.  A study undertaken by the London School of Economics (2012 LSE study) shows that in conservation areas classified as being ‘at risk’, the extra premium on house values drops on average from 9% to 4%.  Areas ‘at risk’ are those where conservation policies become widely ignored by property owners and where no subsequent enforcement action is taken.