The OPDC Planning Committee on April 5th granted planning permission to the controversial planning application from Aurora Developments for a residential tower on Scrubs Lane. 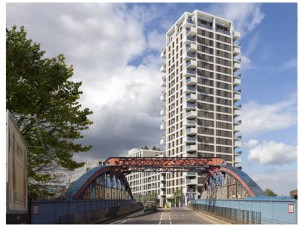 The location is just north of Mitre Bridge and adjacent to three conservation areas (St Marys Cemetery, the Grand Union Canal, and the newly designated Cumberland Park CA on the east side of Scrubs Lane.

There were objections to the application from RB Kensington and Chelsea, LB Hammersmith & Fulham, Historic England, the Canals and Waterways Trust, Friends of Little Wormwood Scrubs, and 41 local residents and businesses.

Andrew Slaughter (MP for Hammersmith) spoke against the proposals. Hammersmith & Fulham councillors Wesley Harcourt and Adam Connell voted for refusal of the application as sid Cllr Hitesh Tailor from LB Ealing.  The vote was 5:3 in favour of granting approval, with the committee chair, the three independent members, and Cllr Ketan Sheth from LB Brent voting for granting permission.

The decision to approve remains subject to endorsement by the Mayor of London. The Hammersmith Society and St Helens Residents Association have jointly submitted further representations (see at NKG South. Stage 2 representations.V3) setting out reasons why the application should be refused as contrary to the London Plan and to policies in the OPDCs first draft Local Plan.

Approval to this application will set a precedent for a series of other residential towers along Scrubs Lane, already in the planning pipeline.  The February 2016 OPDC ‘vision’ that Scrubs Lane will be transformed into a pleasant street, respectful of surrounding heritage assets with a high quality public realm has already succumbed to the proposals of developers.  Public confidence that that the planners of Old Oak will come up with something other than a repetition of the rash of residential towers already blighting Vauxhall, Nine Elms and Battersea has taken a serious knock.